Grand Tactician: The Civil War (1861-1865) is a real-time strategy game combining a strategic campaign with tactical battle game-play. Run your nation, muster, manage and support great armies, and maneuver them to defeat the enemy. Once the opposing armies meet, command your troops to victory in battles fought on historical battlefields.

Choose your side in the American Civil War: Real-time campaign, spanning from Secession to the end of the war, with historical objectives for both sides.
Five campaign scenarios (Pre-War, 1861, 1862, 1863, 1864) and twenty (20) stand-alone battles from 1st Manassas in 1861 to Appomattox Court House in 1865.
Change history: What if European superpowers intervened to end the war, or Lincoln lost the presidential election of 1864?
Scott’s Great Snake: Lay siege, raid and blockade your enemy on land and sea or use blockade runners to keep the life-lines to Europe open.
From Fort Sumter to Appomattox: Watch closely the morale of your citizens and troops. As the war drags on, fervor turns to fatigue, the treasury threatens to run dry, and measures like drafting will cause unrest.
Keep the armies marching: Build and manage the flow of supplies to your armies. Utilize and expand railroad lines to supply and move armies for the first time in history!
Pivotal battles: Fight battles lasting multiple days on historical battlefields. Use engineers to build pontoons and dig trenches, see reinforcements change the tide and commit your reserves to defeat the enemy.
Grant vs. Lee: Manage hundreds of historical commanders with personal attributes and specialization. Famous commanders inspire soldiers and citizens alike and loss of reputation can be irreparable.
Command Great Armies: Huge armies of infantry, cavalry and artillery, with realistic command structures and historical Order of Battle.
Bring the Civil War to life: Amazing Civil War re-enactment and combat footage from LionHeart FilmWorks, and an original soundtrack of old time music and drum and fife band. 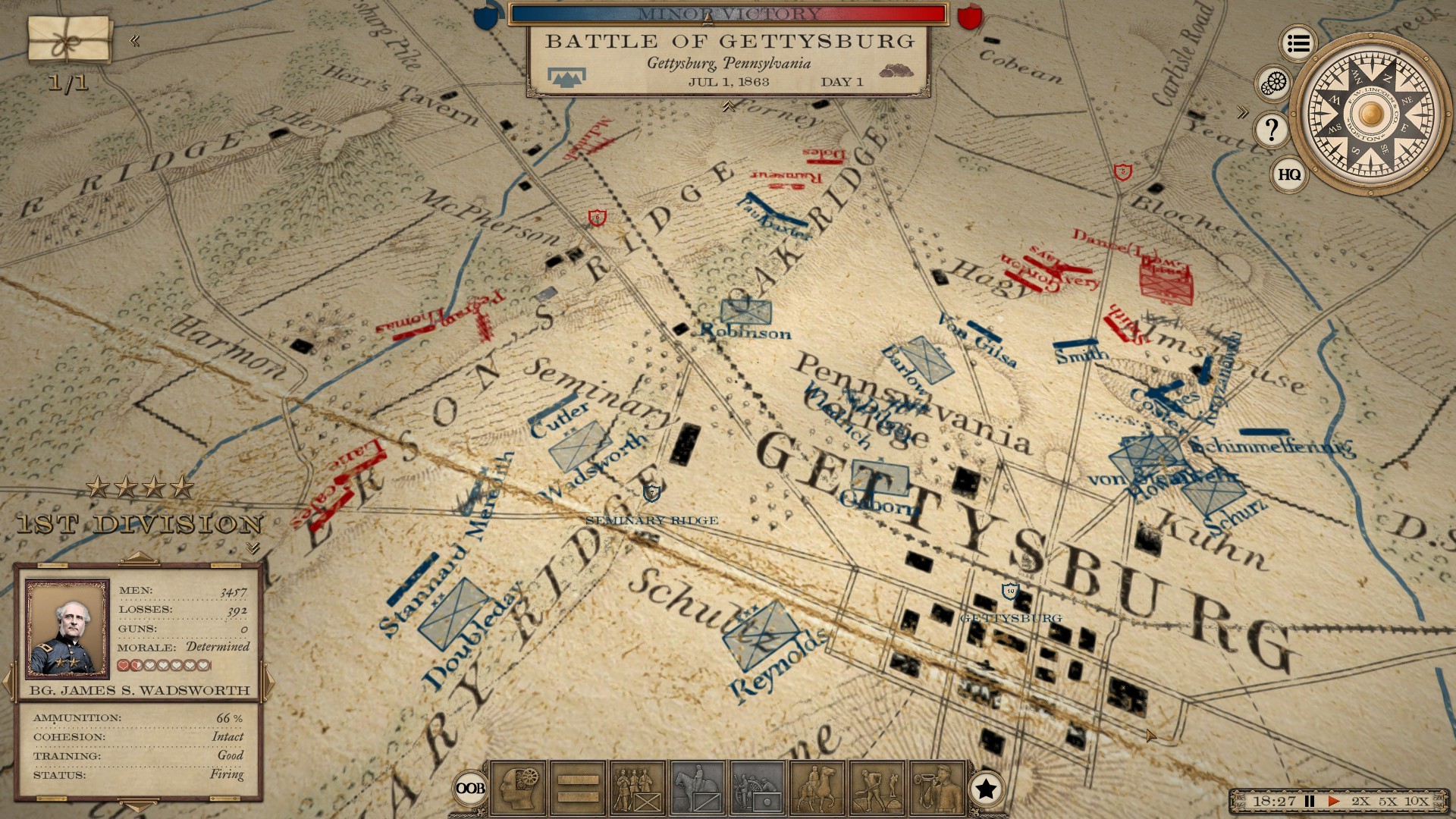 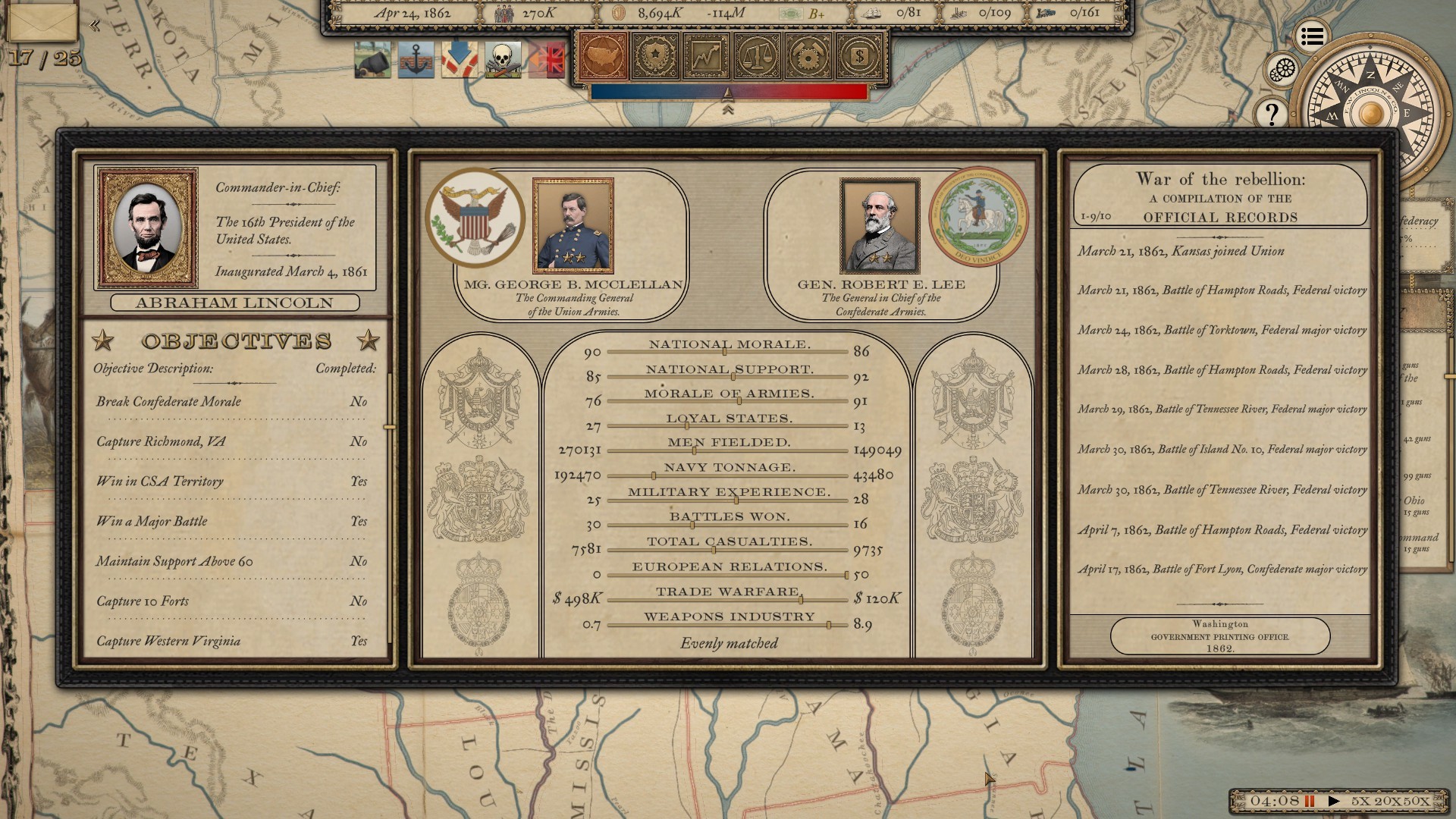 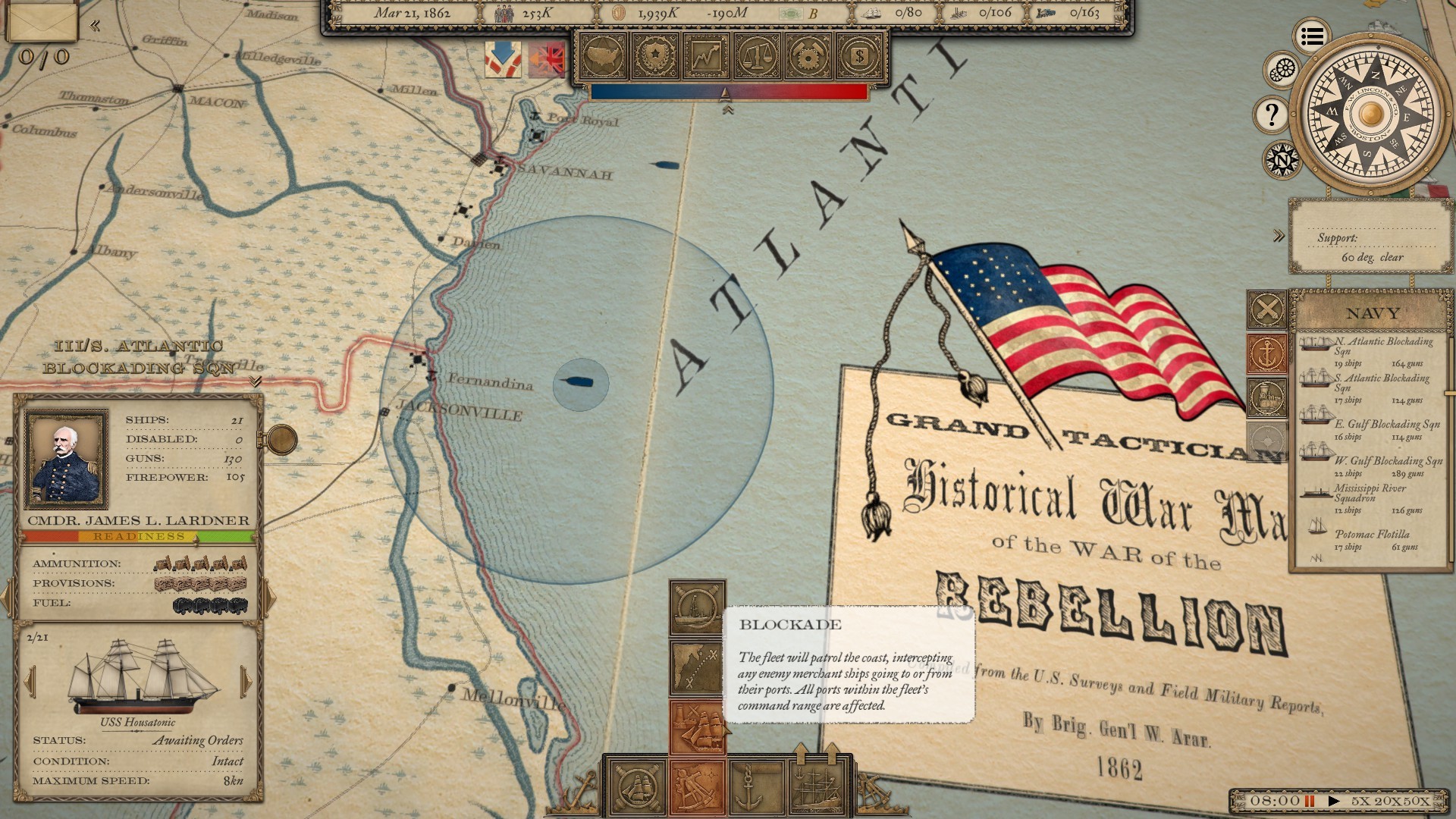 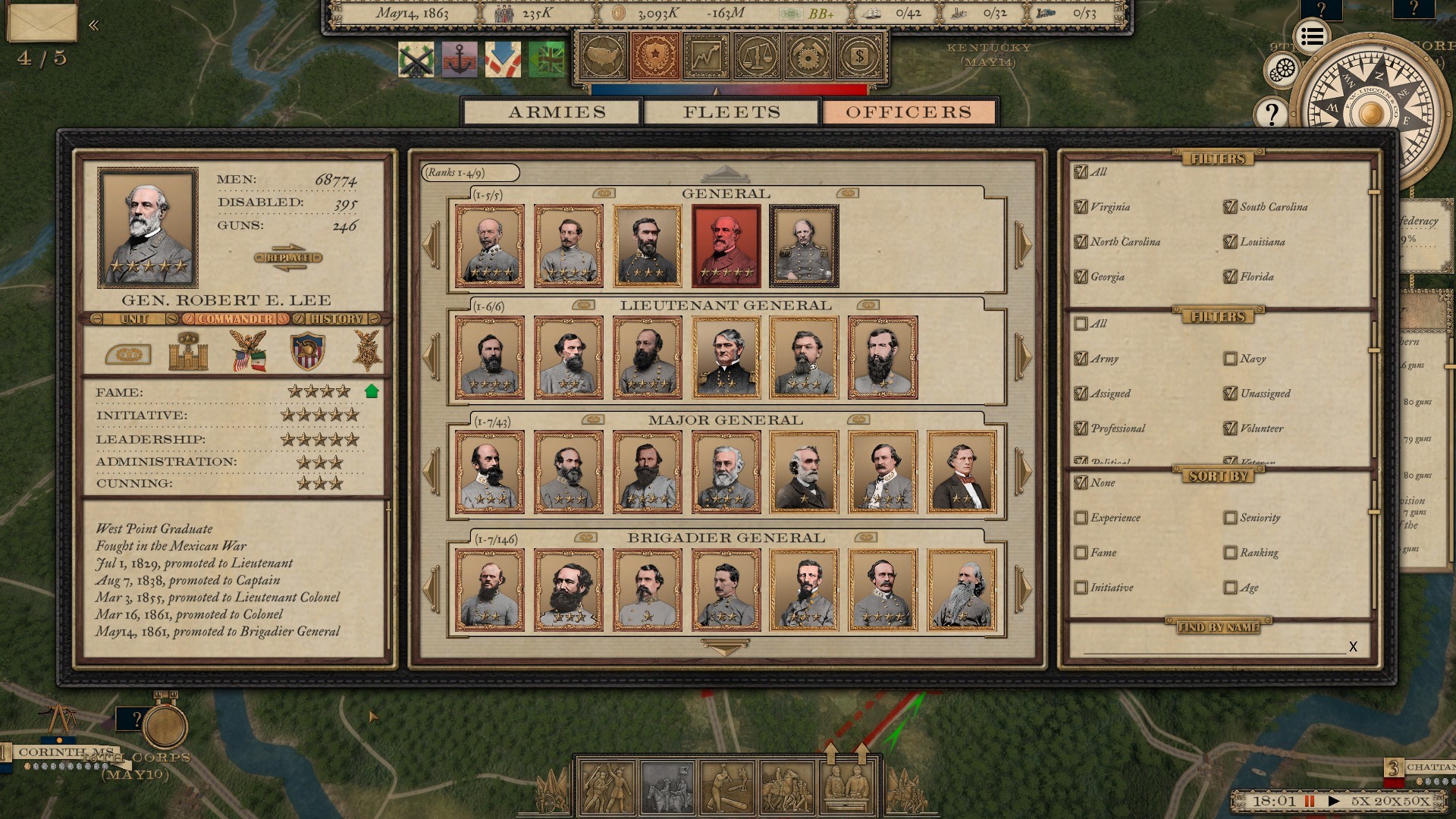 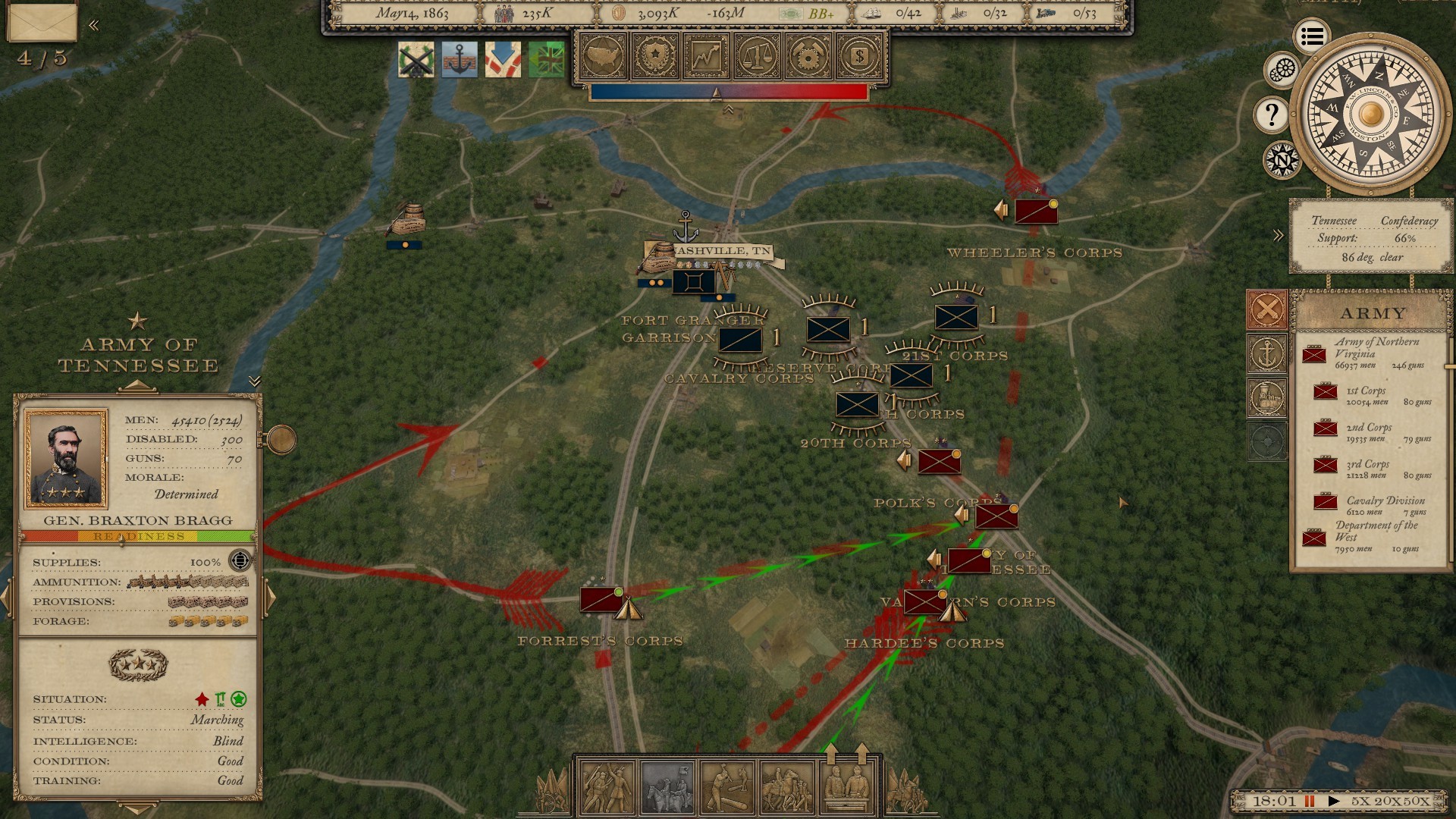